How Phantom Peak Saves Time and Resources with Buzzshot Waivers


Phantom Peak is a brand new, open-world immersive experience in London that’s quite unlike anything else in the world. What happens when you mix a fictional Wild West world, with experiential live theatre, all the fun of the fairground, award winning storytelling… And puzzles? Phantom Peak is born.

Way out in the wild, wild west (or more specifically, a 30,000 square ft location in London’s Canary Wharf), up to 500 visitors each session descend upon the fictional town of Phantom Peak. Having been described as a live, in-person video game, players have the choice of how they explore and interact with the world. From the many food and drink establishments, to a rich museum, a scenic waterfall and canals, to fairground games, and a warren of secret passageways, there’s almost too much to do.

The environment is fun and energetic and visitor largely spend their time being guided by the host of live characters down unique trails, each one packed with it’s own puzzles to solve and secrets to uncover, as each player takes central role in their own unique adventure. With each season the story of Phantom Peak advances, meaning no two guests have quite the same experience whenever they visit.

That’s not all. This Christmas, there’s a new mayor in town. But something mysterious lurks just beneath the surface for those guests who dare to dive deeper into the intrigue and unrest. 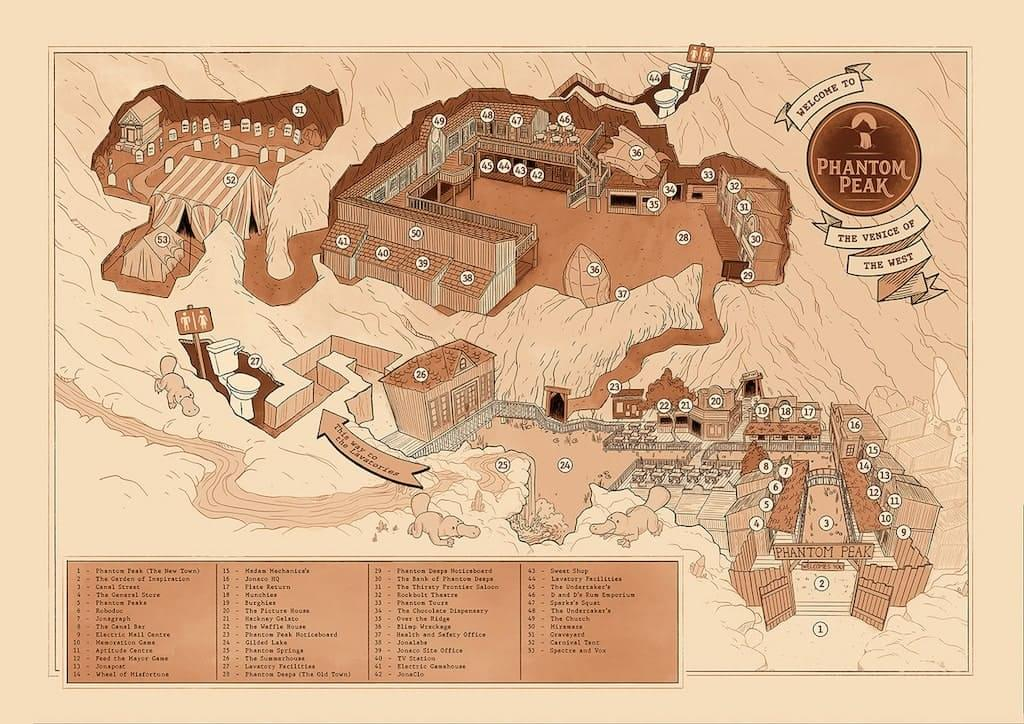 Explore Phantom Peak, the Venice of the West

We sat down with Nick Moran, one of the key founders and operators of Phantom Peak to discuss all things Phantom Peak. Nick is formerly known for creating award-winning escape rooms like Time Run and Sherlock: The Game is Now. Nick and his team recently integrated Buzzshot’s waiver system into Phantom Peak’s guest experience journey. We caught up with him and chatted about the impact a robust and efficient waiver system can have on the day-to-day operation of an immersive venue of this scale.

A Quick & Easy Waiver System for a Bustling City-Scale Adventure

Phantom Peak has used Buzzshot for its waiver management system since the launch of “Hallowed Peak”, a Halloween themed seasonal event earlier in 2022. With a new season, there was a necessity for a waiver system, not only to protect the live actors and the venue itself, but also so that guests could know what to expect for specific activities. However with 500 guests per session arriving at the same time, this would be no small feat. Nick explained,

“What we really need is people to sign waivers and get in quickly. Fortunately, Buzzshot found a way to make that work for us. It’s a really quick and swift signing system people can do from their own devices whilst they’re in the queue.” 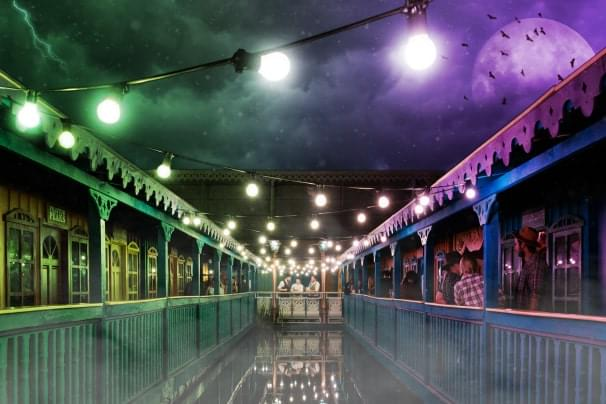 With Buzzshot, when guests arrive at Phantom Peak for their session, they’re given a QR code to scan on their own devices. They then read through the waiver, fill out their custom information, and sign to show their confirmation. Once signed, guests will display a green tick on their devices before being greeted by a host and welcomed inside. From arrival to entry, the whole process of signing a waiver takes just a minute or two.

“With our scale, you haven’t got a lot of time for each player.” Nick explained, “There’s about 15 minutes to get everyone into Phantom Peak. Buzzshot gives us something which can handle that scale, and more.”

Nick continued, explaining the importance of ensuring players actually read and understand the waiver they’re signing, as a protection for all parties involved,

“The main thing is making sure they’ve signed up for the activity they’re about to do. We’ve got a lot of actors on site, and we want to make sure everyone behaves with them. It’s safer for our actors, and for the guests.”

With a venue the size and scale of Phantom Peak, not only does the waiver process have to be robust and efficient, but for Phantom Peak one of the main attractions about having a waiver is the opportunity to collect additional data about their players. Whether requiring specific information for an activity, or adding a question or two for marketing purposes, Phantom Peak’s waivers are highly customisable. For Nick, this was one of the main reasons for choosing Buzzshot,

“I’ve always said Buzzshot is a great system for what it is. What owners struggle to realise is capturing your players data is so important. There are other waiver systems, but we use Buzzshot because you can capture that custom data and use it to build customer relationships on” 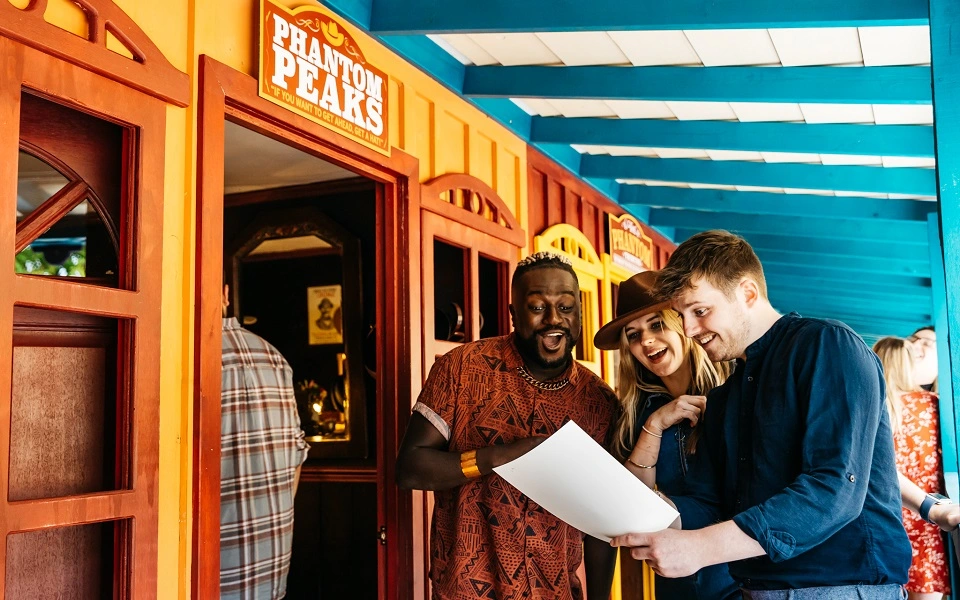 The Future of Phantom Peak

Since opening their doors, Phantom Peak has boasted many positive reviews by tens of thousands of players that have stepped into the experience and this shows no signs of slowing.

From being described by NME as “incredibly compelling”, to “somewhere between an immersive show, giant escape room and point-and-click video game adventure, it’s unlike anything we’ve encountered before” by The N, it’s clear Phantom Peak is quickly cemented itself as one of the most popular attractions in London.

With the plot carefully mapped out over many more seasons to come,. Nick and his team are excited about the long-term plans for Phantom Peak, and what comes next for the compelling IP. It’s clear so far that the experience is immensely popular, and Phantom Peak itself won’t be the end of the story.

“The timeline moves forward each season and Phantom Peak is a living breathing world you step into. That’s what makes this so exciting. If there’s one thing we’ve learned from the fans is that people want more.”

Having technology which supports the fast-paced expansion of Phantom Peak as it grows with each new season to include more trails and more guests, is key. Phantom Peak has put its trust in Buzzshot to continue delivering an excellent customer experience when it comes to signing waivers, safely storing them, and requesting custom data. The process is quick, efficient, and in the hands of the customer.

Nick and his team share their confidence in partnering with Buzzshot for a waiver solution, as they scale Phantom Peak even further in the future.

“We’re continuing to collect waivers because it’s a good thing for any venue to do, and for us it’s a fantastic data collection tool for us to understand our players and make the experience even better in the future.”

To try out Buzzshot’s waiver system for yourself, click here to get started for free here.